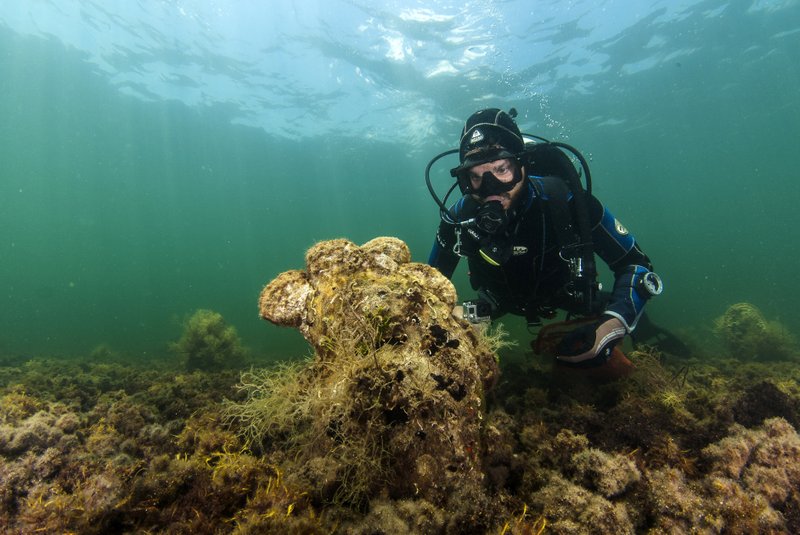 In this Sunday, Sept. 14, 2008 underwater photo, a diver observes a pen shell on the seabed in the Aegean Sea. A new parasite is devastating populations of an emblematic giant species of clam found only in the Mediterranean. Unless scientists can unravel the mysteries of how it is transmitted and find a way of stopping it soon, it could wipe out the entire population and force it to extinction. (Yiannis Issaris via AP)

ANAVYSSOS, Greece (AP) — With rapid efficiency, a mysterious parasite is seeking out and killing a giant species of clam found only in the Mediterranean Sea. Unless scientists can find a way of stopping it soon, they say the mollusk could go extinct.

For thousands of years, the emblematic noble pen shell has been intrinsically connected to human civilization. The largest bivalve in the Mediterranean can grow to more than a meter (three feet) long and has provided food and one of the world’s rarest materials: sea silk spun from fibers it uses to secure itself to the seabed. The mollusk also contributes to clear water by filtering out organic particulates. 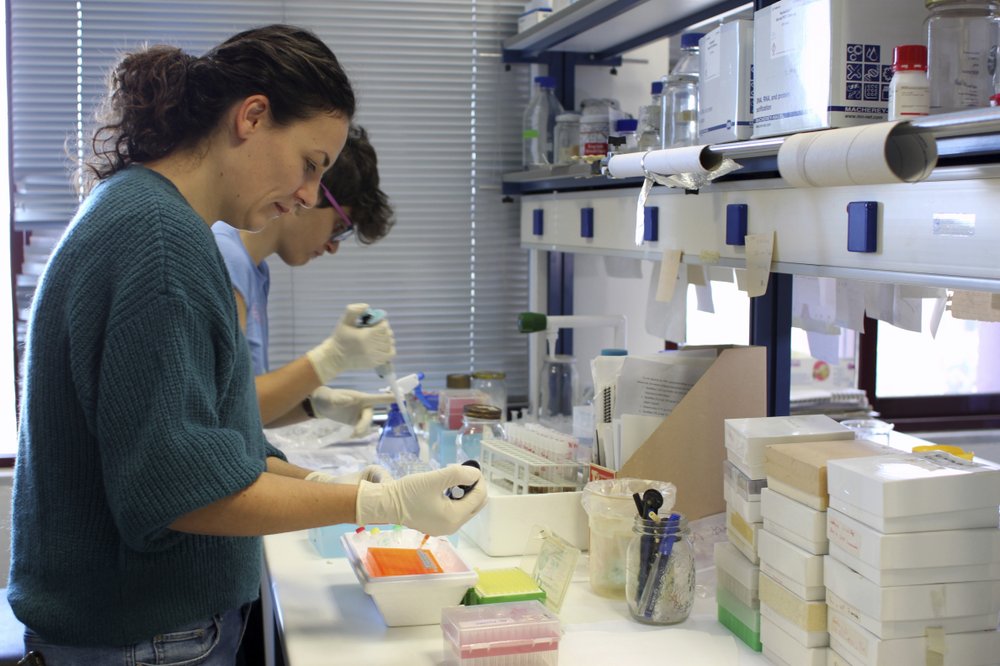 The pen shell, Pinna nobilis, has been on the European Union’s protected species list for decades because of overfishing, pollution and the destruction of its natural habitat, meaning any fishing is banned. But the ban is often poorly enforced, with the animal harvested for food or for its shell, which is used for decorative purposes.

The pen shells, which have a life span of several decades and take years to reach reproductive age, were already dying faster than they could be replaced. So the spread of the microscopic parasite, which first appeared in the western Mediterranean in late 2016 and was identified just this year as a new species, has alarmed experts.

Exactly how the parasite kills isn’t completely clear, although scientists have found it attacks the pen shell’s digestive system. The infected animal is also unable to close its shell, incapacitating its defense against predators. Once infected, death is almost certain.

“In less than a year it wiped out (the pen shell population of) the Spanish coast,” said Maria del Mar Otero of the International Union for Conservation of Nature.

Soon parts of France, Malta, Tunisia and Italy were affected. In recent weeks, tests confirmed the same parasite, Haplosporidium pinnae, is responsible for pen shell die-offs in parts of Greece, and researchers have reported mass mortality as far east as Turkey and Cyprus.

Scientists are now racing to understand how the parasite spreads and its life cycle — essential information for a successful rescue program. One theory is that it could be spreading through phytoplankton, the bivalve’s food source, but nobody knows for certain.

“We cannot be sure of anything at this point,” said Pantelis Katharios, senior researcher at the Institute of Marine Biology, Biotechnology and Aquaculture of the Hellenic Center for Marine Research , or HCMR.

“What we know now is that the Pinnas are dying, that the cause is this parasite, and we know that it’s spreading very, very rapidly,” he said. “And that is going to be a huge problem (for) the ecology and the balance of the ecosystem in the Mediterranean.”

Yiannis Issaris, marine ecologist at the HCMR’s Institute of Oceanography, initially noticed widespread pen shell death off the coast of Anavyssos, southeast of Athens, in mid-summer. He suspected the culprit could be the same one causing mortality in Spain — and testing proved him right.

Now the question is how to tackle the outbreak.

“This is very fresh for the scientific community,” Issaris said. “We’re still at the stage of recording where it has spread to.”

Some parts of Greece still have healthy populations of the mollusks, he noted, whereas in other areas they have been wiped out.

Protecting the pen shell in its natural habitat — sandy seabeds or seagrass meadows — appears “difficult to impossible,” Issaris said, particularly without knowing how the parasite spreads. In Spain, some healthy individuals were moved to aquariums.

Although tests are pending in some Mediterranean countries witnessing mass die-offs, experts have little doubt what the results will show.

One thing’s clear: the parasite is very particular in its choice of victim. A smaller, related species, the Pinna rudis, which also exists outside the Mediterranean, is unaffected.

“We don’t know how it has appeared in the Mediterranean… We only know that it causes mortality only in the Pinna nobilis,” Issaris said.

In the clear, shallow waters south of the Greek capital, dozens of dead pen shells lie scattered in a seagrass meadow, testament to the devastation.

Peering through a microscope at the tissue of an infected individual in his office in Crete, Katharios points out the culprit: small, oval-shaped parasites spread throughout the sample.

Scientists are puzzling over why an organism would be so lethal to the very species it depends on for its own survival.

“Normally parasites in nature do not have any benefit from harming the host, because they depend on the host,” Katharios explained. “But once in a while we may come across incidents like this, where we have massive mortalities.” 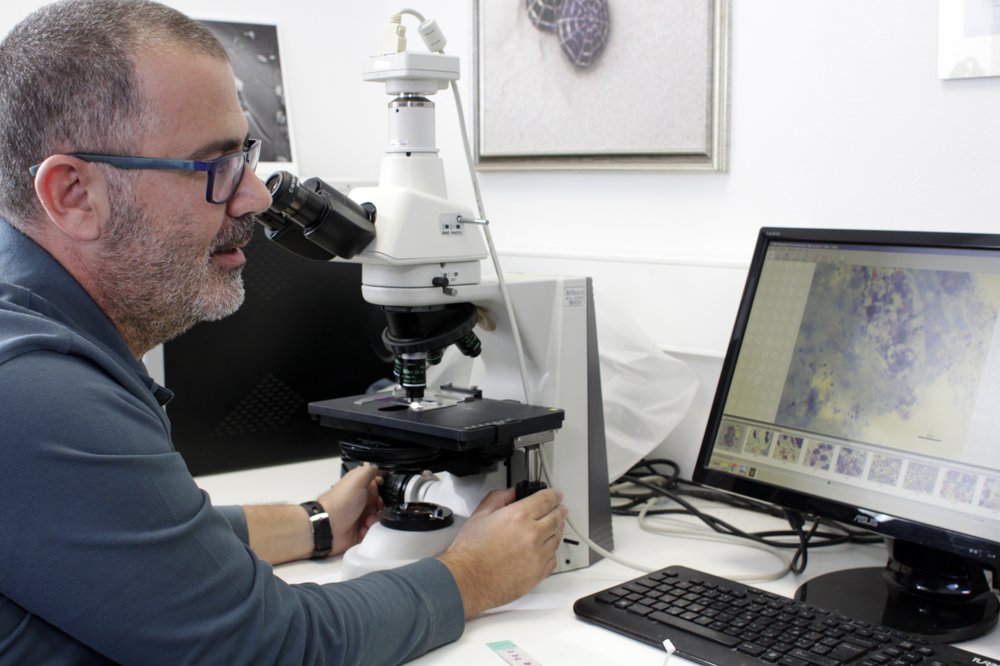 This could just be a natural phenomenon in which the parasite will eventually be wiped out along with its host, he said. Another possibility is that it originated in a different species and for some reason jumped to the pen shell. A third is that the pen shell’s immune system has been compromised by factors such as pollution, climate change or water temperature fluctuations.

“It’s extremely, extremely difficult to find the truth at this stage,” Katharios said.