Th. Dailianis in PATRIS Newspaper “Our nature invites to listen” 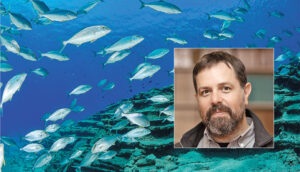 1. Do we have a picture of whether the seas and coasts have been positively affected by the corona pandemic and the resulting restriction of human activity?

A large part of human activities aggregates at the coasts, especially in Greece, which boasts and extended coastline and an abundance of islands. It’s important to have in mind that sea is the final recipient even for activities that take place inland, such as agriculture. We are currently witnessing an unprecedented cessation of activities, which we expect to have a positive impact on the environment. Some of these will be short-term, such as the mitigation of direct disturbances to coastal ecosystems by the reduced recreational activities, marine traffic, and some types of fisheries. Other positive effects will be long-term, especially those related to the slowdown in climate change through the dramatic reduction in air pollution from reduced air transport, industrial activity, urban traffic and road network traffic. There may also be some negative effects, such as the sharp rise in the use of disinfectants and antiseptics, which also end up in the marine environment through the city’s sewer system. In any case, the results of the changes brought about by the period we are going through in the marine environment will be recorded and analyzed through the monitoring and evaluation programs of the environmental situation maintained and carried out systematically by HCMR, both in Crete and in the Greek seas as a whole.

2. Can we estimate how long it may take for nature to fill in certain gaps created by man? Can you give us an example?

A very recent review published in one of the most respected scientific journals suggests we have the ability to fully restore the structure and function of the marine environment over the next 30 years, provided that we take the necessary actions to protect and systematically reduce the pressures on the environment, including those related to climate change. This conclusion is particularly important, on the one hand because it gives hope that we haven’t yet reached the point of no return, on the other hand because it underscores the urgent need for change of practices. Nature has enormous capacity and, therefore, an inherent possibility of recovery when the pressures that cause degradation are lifted. For example, historical data show that global fish stocks increased significantly following the sharp decline of fisheries during the two major wars of the last century. While the analogy with today’s health crisis is clear in the latter example, environmental benefit in times of distress remains a sad side effect. On the contrary, the decision to give nature a chance to recover should be deliberate and under conditions of normalcy, aiming to avoid a future global environmental crisis that will directly affect human civilization.

3. When everything returns to normal, would you suggest some restrictive measures to protect nature? Would that have had a positive effect, regardless of whether it was accepted by scientists?

At the local scale, recovery rates can be much faster. Especially in the Greek seas, which maintain a relatively good degree of environmental quality, data show that the endorsement of protection measures can have obvious effects on the functioning of ecosystems and the abundance and diversity of organisms, even in the first few years following their implementation. A recurring recommendation by conservation experts is the establishment of marine protected areas (MPAs) in strategically selected geographical locations. Within their core area, all human activity should be prevented in order to provide the conditions so that the marine environment can naturally recover. Although these management practices do not directly address large-scale threats, such as global warming, they mitigate their impacts and increase the resilience in marine ecosystems through the removal of local-scale pressures. This way, MPAs can act as reserves of high environmental quality, and at the same time promote natural enrichment of the adjacent shores, with beneficial effects on human activities such as fishing and tourism.

4. From your research, how destructive is human activity to the marine environment? What’s missing and not going back?

Change in the marine environment has been very fast in recent years. Especially in our neighborhood, the Eastern Mediterranean, this change is directly visible. Typical species and habitats reduce their presence, while the introduction and spread of exotic species is under ongoing intensification. The dreaded “desertification” which threats the countryside of Crete, can already be seen below sea level, where marine vegetation is under major decline and barrens are almost predominant. This has brought about significant changes to the underwater seascape and the hosted biodiversity. Yet, if the above can be considered reversible to some extent, what is definitely final and impossible to restore is the loss of species that have survived for millennia and became extinct in recent years. A recent example is Pinna nobilis, the emblematic noble pen shell of the Mediterranean, which used to be ubiquitous at local habitats in relatively satisfactory abundance. Over the past three years, Its populations have faced an unprecedented and rapidly spreading mass mortality across the Mediterranean. We recorded the last few living specimens in Crete over the past spring. In the summer almost total mortality was recorded and at this moment, this species may already be extinct. The imminent threat of extinction is present for a substantial number of other marine species.

5. In a realistic scenario, what can we do?

The current pandemic, with all its dramatic consequences for society, is at the same time a unique opportunity for us to think and review our practices and our course in relation to the environment. We may not have a similar opportunity again in the future, given the accelerating rate of decline. Therefore, we must quickly act towards the effective reduction of our environmental footprint and the adoption of sustainable practices in all forms of production or activity. For example, improving water quality, as required by national and European regulations, is vital to reducing the various forms of pollution in the marine environment. Similarly, the promotion of sustainable fishing practices, through targeted management measures such as imposing quotas and regulatory rules for fishing gear. Increasing international cooperation to reduce practices that promote climate change. At the individual level, we should avoid consumption of protected species, such as the date mussel, or are caught in violation of the applicable restrictions of minimum size and time period. But also for us scientists and researchers, the intensification of monitoring and systematic assessment of the marine environment to suggest targeted solutions to protect and improve the quality of our seas.

Dead noble pen shell (Pinna nobilis) photographed in May 2019 in Crete. The pen shell is threatened with extinctions in the past 3 years due to a mass mortality spreading across the Mediterranean. Photo: Thanos Dailianis, IMBBC-HCMR 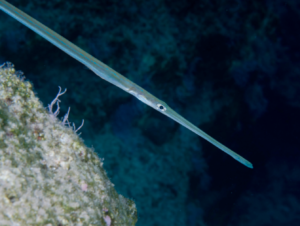 Spreading of non-indigenous species such as the trumpet fish (Fistularia commersonii) is accelerating in the Cretan coasts and is expected to further rise in the next years. Photo: Thanos Dailianis, IMBBC-HCMR