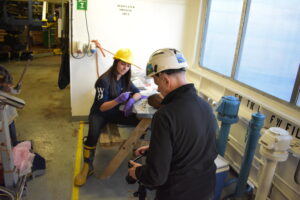 It is an unexplored place that can reveal many secrets to us, not just about life on Earth. The Researcher of the Institute of Marine Biology, Biotechnology and Aquaculture (IMBBC) of HCMR, Dr. Paraskevi N. Polymenakou, speaks to “PATRIS” about her research in volcanoes.

“So, what can the study of volcanoes offer in terms of their microbiology? The knowledge to understand the physical boundaries and different mechanisms involved in the evolution of life in a rational way in order to assess the possibility for the presence of life elsewhere in the universe,” she stresses.

What can we learn from the study of volcanoes and their extreme environments?

“The volcanoes, these natural formations resulting from cracks of the earth’s solid crust, have always been points of interest due to their intense activity accompanied by eruptions and earthquakes. This is why they are treated by most people with awe, as a frightening natural phenomenon.

However, they can be a valuable source of wealth both in the agricultural sector, as the land around them is particularly fertile, as well as in the tourism sector attracting the interest of visitors.

One aspect that most people ignore is that volcanoes, due to their particularly extreme environmental conditions, such as high temperatures, acidic environment, high concentrations of heavy metals, etc., are the ideal environments for the exploration of the most extreme life forms, known as extremophiles.

These microorganisms are the earliest known life forms on Earth and their study brings us closer to the big unresolved questions related to the possibility of other life out there.

So, what can the study of volcanoes offer in terms of their microbiology? The knowledge to understand the physical boundaries and different mechanisms involved in the evolution of life in a rational way so that we can assess the possibility of other life forms being present elsewhere in the universe. 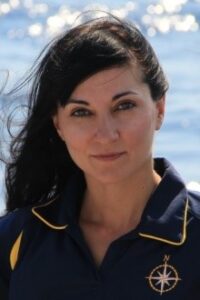 What have you studied so far and what are your next plans?

In other words, Greece can be characterized as a ‘paradise’ for environmental sciences. My research interests in recent years have focused on the exploration of microbial life in the most extreme ecosystems of the Hellenic seas, in the underwater volcanic active areas and specifically in the extreme environments of the Hellenic Volcanic Arc. 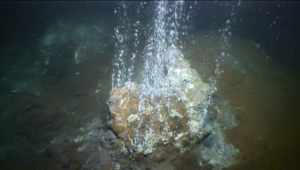 The areas we have studied so far include the hydrothermal springs of Milos, underwater lakes in Santorini caldera, active and inactive polymetallic chimneys in the underwater Kolumbo volcano that emitted gases and water of high temperature and microbial mats of various colors such as orange, red, white that we can find them in many hydrothermal areas, covering the seabed or the surfaces of polymetallic structures.

We organize and perform sampling campaigns with oceanographic vessels and we are using state-of-the-art robotic vehicles in order to collect and analyze material from these extreme environments. We collaborate with top scientists in the world in the field of volcanic exploration and exploitation such as the Professor P. Nomikou’s team from the Department of Geology of the National Kapodistrian University of Athens, scientists from the Joint Genome Institute, Department of Energy, USA as well as scientists from the Woods Hole Oceanographic Institute (WHOI) of the USA through NASA-funded programs, the INGV Institute of Volcanology in Italy, etc. 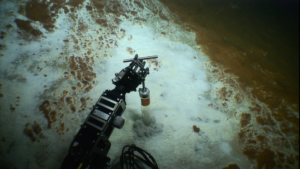 By using state-of-the-art molecular techniques available at the laboratories of IMBBC in Heraklion of Crete, we perform analysis of the full gene content of all the microorganisms that live there, i.e. we analyze the “metagenome” as we call it of environmental samples.

Additionally, we isolate the extremophilic microbes from these environments, that we preserve in special conditions in super-freezers at -80 oC for further investigation. Over the past 10 years, our research has revealed an impressive microbial diversity, one of the highest being recorded on a global scale, characterized by new microorganisms and novel functions with a plethora of potential applications in biotechnology. In other words, the extreme environments of the Hellenic Volcanic Arc, host thousands of different microorganisms which most of them are unknown so far.

Our future plans include the monitoring of Santorini caldera by deploying specialized equipment at its seabed, the collection of material from the deepest layers of volcanic seabed to study the sub-seafloor biosphere, i.e. the microorganisms that live hundreds of meters below the surface of the Earth’s crust and the exploitation of all our metagenomic and genomic data in the field of biotechnology.” 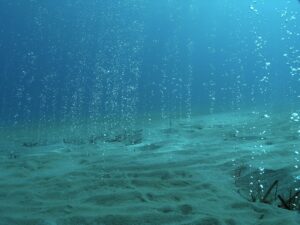 Talking about extraterrestrial life, how can we discover the Universe through what is deeply hidden on Earth?

“First of all, I would like to stress here that by the term “extraterrestrial life” we refer to the earliest life forms and these are the microscopic organisms, i.e. the microbes. Due to the extreme environmental conditions prevailing on other planets, a good approach to study the possibility of extraterrestrial life is to find similar conditions on Earth, i.e. areas on Earth that environmentally exhibit similar conditions to those of other planets. Indeed, in earth’s environments, such as underwater volcanoes, we can encounter a range of extreme conditions. But what exactly do we mean by the term “extreme conditions”?

“Extreme conditions” are the conditions that, although they seem inhospitable to humans, nevertheless constitute an “oasis” for microorganisms. These conditions include extreme temperature values (from −20 °C to 122 °C), acidic (pH=0) or alkaline conditions (pH=12.8), high concentrations of heavy metals such as mercury or arsenic, anoxic conditions i.e. lack of oxygen etc.

In the places of extreme conditions on Earth, we have the chances to identify the most extreme organisms that will allow us to assess the possibility of life presence on other planets. Of particular interest is the sub-seafloor biosphere, i.e. the microorganisms that live hundreds of meters below the surface of the Earth’s crust. There, we can identify the first representatives of life on Earth responsible for the genesis of geological structures as well as all known ecosystems.

The collection of material from the marine sub-seafloor is carried out with the underwater research drilling within the framework of the International Ocean Discovery Program (IODP) in which we have submitted a proposal to collect such valuable material from the Santorini volcanic complex. The unique environments of our country are a magnet for scientific research worldwide and Greek scientists must always take the lead in any research carried out in Greece. 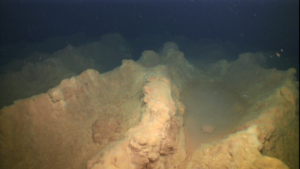 What are the possible applications in biotechnology? What can we expect from your findings?

“Microorganisms from marine extreme environments, as well as their genetic material, offer remarkable prospects in a wide range of biotechnological applications. I will briefly present you some representative examples of applications on which we have identified relevant microorganisms and genes in our databases.

We can significantly contribute (a) to the field of bioenergy for methane production by discovering enzymes from methanogenic microbes (i.e. methane-producing microbes); (b) in the food industry with a range of enzymatic tools for the use of polysaccharides from raw materials such as marine algae, for the production of high value added products; (c) to deal with environmental pollution with extremophilic micro-organisms and enzymes that can biodegrade (break down into simpler and non-toxic substances) toxic pollutants; (d) to genetic engineering by the discovery of appropriate enzymes resistant to high temperatures such as polymerase; (e) in the field of pharmaceuticals with enzymes or other substances for the treatment of diseases such as antiviral drugs to treat the symptoms of viruses such as Covid-19, this “nightmare” that has affected the lives of all of us.

So far, we have built an excellent database of genes and enzymes from environmental samples, as well as from microorganisms, to exploit them in a range of applications that is continuously being enriched with more data. Currently, our database from the Hellenic extreme environments includes more 30 million genes that encode proteins.

A European Eranet programme is currently underway in which we will try to identify new enzymes for the breakdown and exploitation of algae in the food industry, while it is also in our immediate plans to explore our data to find antiviral drugs.”

Paraskevi N. Polymenakou is a Researcher of the Institute of Marine Biology, Biotechnology and Aquaculture (IMBBC) of HCMR in the field of “Environmental Microbiology with Emphasis on Extreme Environments”. She holds a Bachelor’s degree in Biology, a Master’s Degree and a Ph.D. from the University of Crete. Her research activities focus on the field of molecular microbial ecology, the characterization of the microbiome of environmental samples and the biotechnological exploration of genomic and metagenomic data. She is in charge of the Laboratory of Extreme Environments at IMBBC and she has initiated the creation of the first collection of microbial strains from extreme environments of the Eastern Mediterranean for their exploitation in biotechnological applications. She has participated as Principal Researcher and/or Collaborator in a large number of international and national research projects. Her research work has been presented in 41 publications in peer-reviewed international scientific journals such as Nature, Scientific Reports, Environmental Microbiology, GigaScience, PlosOne (h-index=21).